We’re all just walking each other home. ~ Ram Dass

Outside of our daily routines and away from our regular landscape, travel and adventure always tend to open new doors and give us a fresh perspective.

The times that a cold, smashed veggie burrito from the lost corners of your pack is the best thing you’ve ever tasted after long, upward journey. The times where the only decisions in your immediate future are running the mental trade offs of what you need to pack, knowing that you’ll be hauling it for the better part of the day.

By far, my favorite part of travel is being present in a new and unfamiliar place and experiencing it to the fullest.

Fueled by a thoroughly laid-back island culture where no one locks their car doors and most are quick to help with recommendations or directions, hitchhiking is accepted and encouraged on Bowen Island.

It’s a spot a few minutes from the mainland, off the coast of Vancouver, British Colombia, yet still manages to feel a world away.

A place where stiff-thumbed travelers can catch a ride from a kind stranger. It’s designated as travel at your own risk, but generally safe, with no payment required or expected. 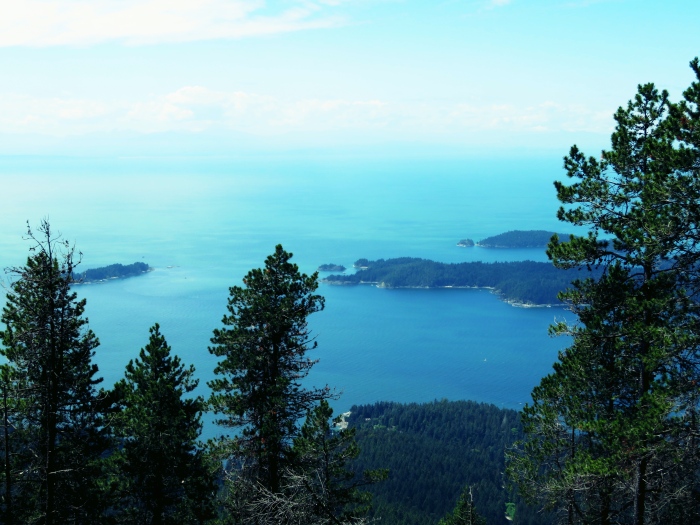 After a healthy dose of “Type Two” fun hiking the challenging and steep Mount Gardner, I was already a good ten miles into the day once I completed the trail and yet still a good five miles from town.

Worn out from my adventure, I was sweaty, smelly and in need of both a hot shower and a good meal, so I couldn’t wait to embark on a practice that is considered a bit more sketchy in the U.S.

Thumb out, I started walking, figuring I might as well be making progress in the general direction of town while I waited for a lift.

Then I stopped counting.

Soon enough, I could recognize by the speed at which my fellow travelers approached that I would already be passed over well before my sweaty and tired hiking pole-sporting silhouette would show up in their rearview mirror.

This must be what not being picked for a random recess scrimmage feels like. Except as an adult.

Thoughts passed through my head, just as fast as the cars…

Am I doing this right?

At least a mile and a half into my journey back to town, I heard an unfamiliar sound.

Loud and grumbling, it was the sound of a truck decelerating behind me. As I turned my head, I saw and older man in a dirty work truck, the wrinkles surrounding his eyes resonated with significance as our gaze met with a familiar theme: we were both exhausted.

Whether the dust had rumbled up from the road or from within his truck cab, I wasn’t sure.

I smiled and accepted, opening the passenger door of his truck and happy to be given the courtesy.

Now, this was not any kind of sandwich I would be happily inclined to eat. But that doesn’t mean his germ meter wasn’t drastically different than mine.

Thus, I carefully navigated my entry into his vehicle with the possibility in mind that he would be consuming it later today.

Or whenever the type of person that stores a bare, unwrapped or contained sandwich on the passenger side floor of a vehicle decides to eat that sandwich.

We talked about life, careers and travel. How we happened to come upon the island. Me in the last year, him 30 years prior. I said I was visiting the island for a yoga event mostly, but was exploring in general.

He was genuinely surprised that someone might go on vacation to do yoga.

You can add that to the list of our polarities and preferences.

His truck was scattered with schedules, projects, meal remnants, hard work and construction dust among other things. It smelled as such.

On the island for a week, I would eventually become “that one mitten girl” that people saw walking to or from town, with my hiking pole or pack in tow, ever so proudly wielding my hand for appropriate direction when locals asked where I came from and how I had arrived there.

I eventually scored a few more rides that week, some even offered outright.

But my first go at hitchhiking held the most important lesson:

You are filthy and smelly. So am I.

It’s nice to meet you.

View all posts by courtintheworld